My kids challenged me to make a video of their FREE play with SuperZings and Lego Duplo toys that looked like some sort of a movie with lasers, lightning and a bunch of cool visual and sound effects. . . and music too! It took a while, but here it is–part one. WARNING: this is a BATTLE SCENE; you know, when children play with toy soldiers and war?! You know I know… many don’t like that sort of thing. But that’s how we played it then. BIG SMILE 🙂😷

This is one of the many cool things about being a stay-at-home dad. I get to be a kid again freeplaying with my children while learning to make a family video. It’s an excellent father-and-son bonding time. The editing part, not too much… that’s the frustrating part because it takes time away from being with the kids, especially when you hit a technical snag that takes at least half your brain to solve.

The boys get to be familiar too with video-making, especially since they are the ones who requested lasers and lightning, at times, in specific locations.

This one took a lot of time, not because of the effects. I’ve already learned how to put the complicated video effects on the previous, father-and-son free play videos from Gibraltar and Morocco. With this one, it took a while because the video-editing software I used crashed while finalizing or “rendering” the video. We have an old laptop but can’t afford to buy a new one. So, I had to learn a lot of new things to get it working and to make the video-making process more efficient.

Not that we haven’t had enough time with the kids in the past 3 months of coronavirus lockdown, right? Some would say, that’s too much time with the kids! I say, at least I don’t have to walk the 1.6-kilometer to school AND BACK everyday (well, almost everyday!).

That’s a good thing about coronavirus: we have more time for each other and we learn more ways to have quality time together. For example, at the height of the coronavirus quarantine here in Spain, the boys came up with playing paper football game on the roof. And we played it almost everyday during 43 days of strict confinement when the kids were not allowed to leave the house, at all.

Or, the other day when my 8-year old boy made his first checkmate of me in chess which is another regular activity during our lockdown.

Of course, it’s not all fun and games. As a full-time father and part-time husband for the past 3 years, it’s my job to run the household with tremendous help from my governess-of-a-lovely-wife of course. So, the boys also learn about responsibilities and chores, such as washing dishes, making beds, folding laundry, and cleaning up (in my style) one small section of the house a day.

So, a little over 3 summers ago, I still thank God, Allah and the big fat Buddha 😉, that we decided to move to Spain for a family gap “year” and quit the job, have a serious family lifestyle change, embark in a semi-nomadic life, and focus on raising happy and healthy children.

As for time-with-kids. . . Now, I get to have free play with my kids, cook and clean with them, walk with them from school, watch them flourish, learn from them and, at the same time, learn some new skills like discovering Andalusian children songs, making our own flamenco-inspired music and creating family-friendly videos.

So, how can you make a video with kids at play, check out what I’ve learned on this (linked) separate post.

The next time you’re looking for cool things to do with your little ones, grab your phone and start shooting. It’s a LOT OF TIME making VIDEO. Hardware and software are quite cheap, but the experience is priceless for both you and your kids.

When your children go “WOW!” while watching the video that you make OF them, you almost feel like a superhero, if not a superdad!

Unlike the previous SuperZings free play videos that we shot outdoors “on location” (he, he… that sounds like real fancy professional, doesn’t it?) in Chefchaouen–what my children call “the city of blue”–and Gibraltar, UK, this one was indoors at home in Jerez, Spain.

“There’s Life Out There” by Cooper Cannell

CHECK OUT more family videos of kids at play outdoors!

Beach under the winter sun.  It is this happy houseband‘s favorite babysitter.  And what better place for our young boys to combine freeplay in three languages (Polish, English and Spanish) with getting some winter sun tan than here in the Costa de la Luz. In the first few days of March, we headed off to explore a new beach: Playa de la Puntilla in El Puerto de Santa Maria in the bay of Cadiz, only about a 15-minute drive from Jerez.

With over 300 days of strong Andalusian sunshine here in southern Spain, you would not think that there would be snow. Think again! The Sierra Nevada, about a one-hour drive from the city of Granada, boasts the southernmost point of Europe where you can ski, sled and snowboard as late as early May.  You can literally hit the snow slopes all morning and swim in the Mediterranean in the afternoon. The snow resort of Hoya de la Mora (loosely translated: blueberry ear or leaf) offers family fun sledding, skis for beginners, and other snow plays.  And best of all. . . it’s FREE!.

Not far from the better-known surfing capital of Europe of Tarifa in the coastal region of Cadiz, Spain, Bolonia is a hidden gem of a destination for both individual and family-oriented explorers. Only 30-or-so kilometers away, Morroco’s coastal mountain can be seen from Bolonia—an off-the-beaten-path destination for most foreigners that is easily worth a 3-day visit. So, what to do here with your small children? 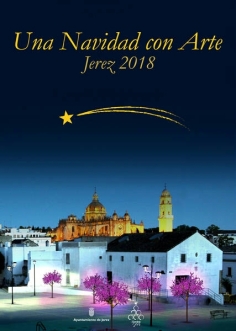 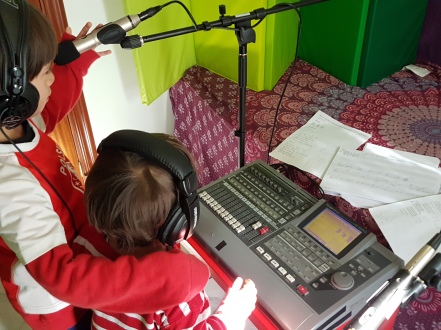 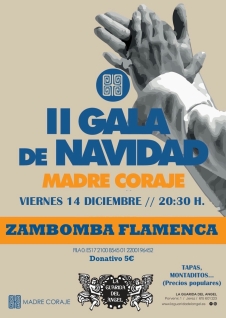 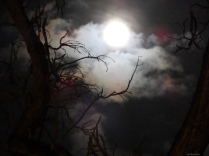 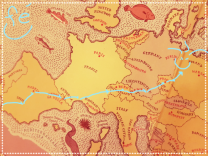 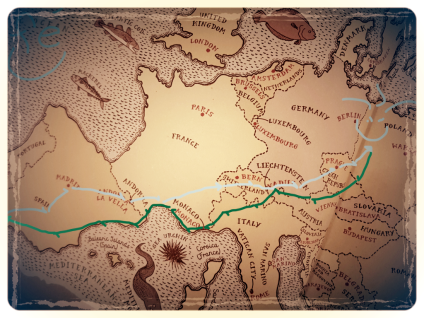 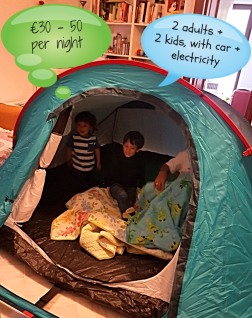 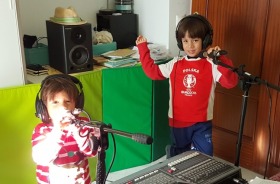 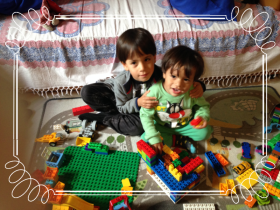 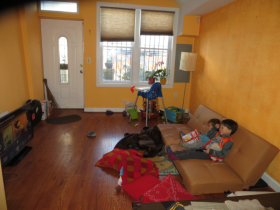 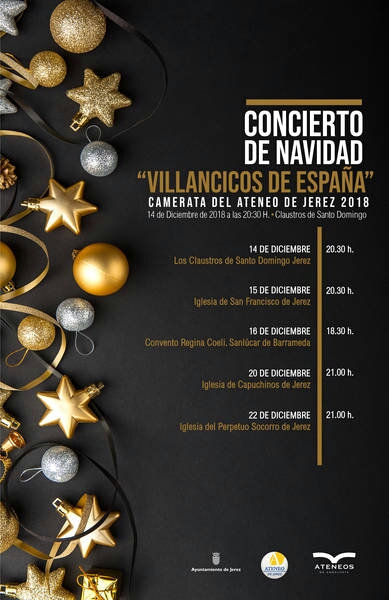 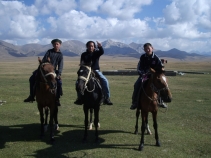 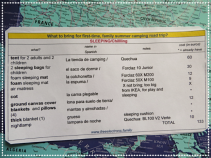 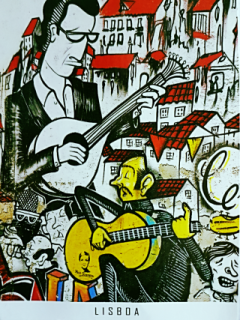 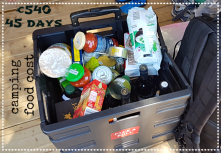 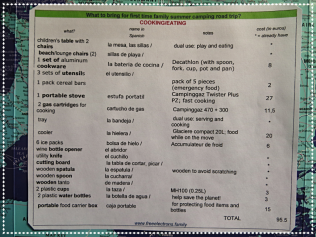 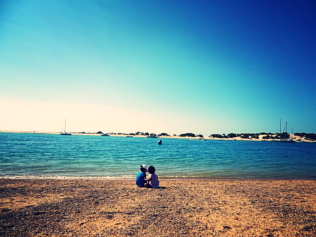 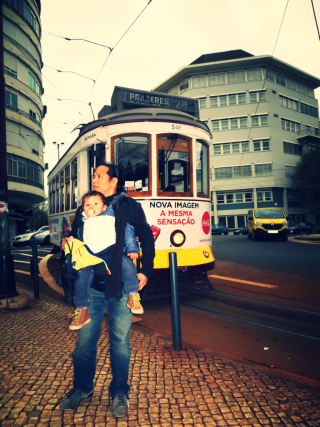 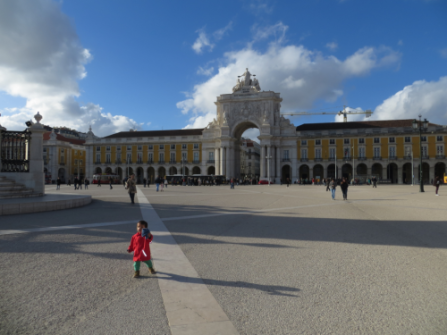 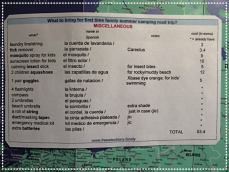 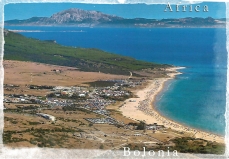 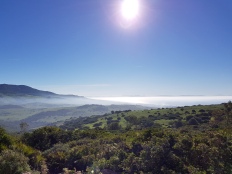 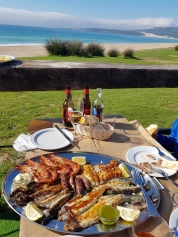 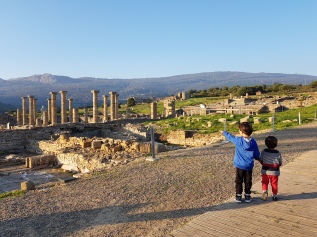 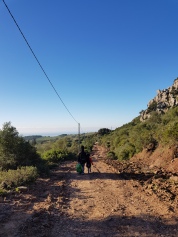